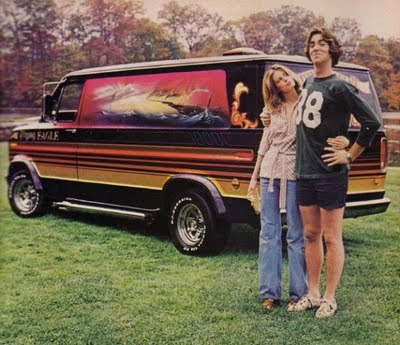 When it's February and it's cold and pissing down here in the UK, and everyone is banging on about The Horrors and The Maccabees and Lana Del Ray, I like to take myself off to a better place in time: namely, to the summer of 1976 in the American mid-west, sitting in a Ford truck with a crate of beer and a bong, and watching the sun go down while listening to Boston.
Best known for the opening track More Than A Feeling, Boston's debut album set the template for the golden age of AOR/Arena Rock in the late 1970s and early 1980s. Due to the visionary studio genius of Tom Scholtz the album sounded at the time like it had arrived from space - and it even had a cover which featured a spaceship which was shaped like an electric guitar. As a kid experiencing Boston for the first time I could barely imagine anything more legendary.
And I still can't. So here's one of the highlights from the record, which starts out as an acoustic track with the smoothest harmonies from the late Brad Delp, very much in the tradition of the Californian sound typified by The Eagles and America. But this being Boston the song quickly moves up into full grandiosity, with layer upon layer of twin guitar and hammond organ solos, hand claps and gratuitous drum fills.