Barney Hurley, the man behind our hugely popular AOR Rarities Playlists series, has been back in the studio after a break of many years - and Mayfair, the teaser track from the upcoming EP by his new band Powder Blue Tux, has just been released. Back in the mid-1990s Barney was the founding member of the cult band Samuel Purdey, whose Steely Dan-influenced album Musically Adrift couldn't have been more at odds with the prevailing Britpop mood of the time. But the album was recently released worldwide  by Tummy Touch and it finally received the response it deserved.

"It was getting rave reviews in magazines like Q, MOJO and Uncut," says Barney. "I got the bug back and decided I wanted to be involved in music again. The first project I started was a jazz fusion album with a friend who's a jazz pianist. I know he won't mind my saying so but he didn't share my passion and enthusiasm for the project and the material suffered, so I shelved it. I had a good think about musicians I know well and who I could have a good working relationship with so called Ben and Scott Addison of the late, lamented Acid Jazz band, Corduroy. I've known Ben and Scott for 23 years as I used to work for the Acid Jazz label. Also, they sang background vocals on a couple of the Samuel Purdey songs, and when Samuel Purdey toured, Ben sang background vocals and played percussion. I spoke to them both at length and the three of us shared the same vision for the project. We almost immediately went into the recording studio and Mayfair was born. 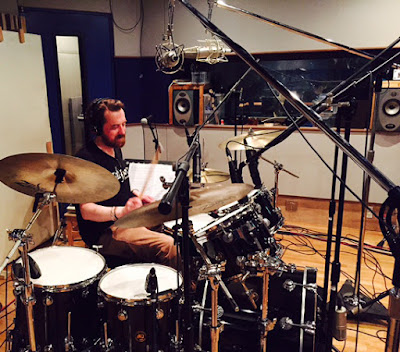 We are now working on the second track, which is called Container Zero. It has an upbeat, almost disco feel. The best description of it I can think of is it's a cross between Donald Fagen and Donna Summer. We're using the same musicians we used for Mayfair as I want a continuity in the sound of the EP. So we're using Elliott Randall, bassist Winston Blissett, rhythm guitarist, Greg Lester and backing vocalist, Liz Fletcher. The EP will be mixed by Bob Power, as he did a great job on Mayfair. Bob mixed Samuel Purdey's Lucky Radio twenty years ago and when I arrived at Chez Bob Studios in Manhattan to mix Mayfair, it was as though we'd mixed Lucky Radio the previous day. He hadn't changed one iota.

On the second day of the mix I felt like there was something missing and came to the conclusion that the track needed horns. Luckily, my friend Don Breithaupt, the founder of the superb band Monkey House had introduced me to Michael Leonhart of 'The Steely Dan Horns' a few nights before. (If you haven't heard Monkey House, I strongly advise you to check out their last album Headquarters. It's genius.) I sent Leonhart the half-finished mix of Mayfair and asked if he could arrange a subtle, sweeping horn arrangement, that could be put quite low in the mix, to give it a classy sheen and bolster up the track. The only reference I gave him was the Joni Mitchell song The Hissing of Summer Lawns. I wanted the horns to sound like the Tom Scott arrangement which is just flugelhorn and flute.

A couple of days later I was producing Leonhart and Walt Weiskopf in a studio in Brooklyn. That was a gas. They were very nice guys and consummate professionals. I'll definitely be contacting Leonhart again for the tracks that horns lend themselves to. After Bob and I added the horns and completed the mix and I had a few days left in Manhattan, I decided I may as well get it mastered by the best of the best, Scott Hull, the owner of Masterdisk. He's mastered everybody - Steely Dan, Donald Fagen, Bruce Springsteen, Sting, Bob Dylan, Miles Davis. You name it, he's mastered it. And he did a wonderful job on Mayfair. 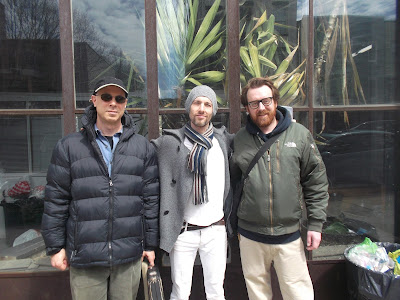 The EP is going to have five tracks and will be released by a Japanese label. We've had a few offers but have yet to decide which label will be releasing it. Luckily, I've found the perfect engineer for this project. His name is Wes Maebe and he works from his Sonic Cuisine Studios in London. I first met Wes when we were recording Elliott Randall's lead guitar part at his home studio. The first thing that struck me about Wes was that he had great ears and was very 'on the ball'. Also, he is an accomplished musician so, as the producer of this project, if I run into any musical hurdles, I'm sure Wes will be able to help me out, in which case he would get a co-production credit.

A little plug for my bandmates. Corduroy are playing a reunion gig at the Jazz Cafe on Friday, September 25th, so if you're an old Acid-Jazzer and fancy a trip down memory lane, get yourselves down there. I haven't seen Corduroy since 1994. I can't wait."

View From The West Coast Music Magazine said…
A great track...it really makes me want to hear so much more from Barney and his new project 'Powder Blue Tux'. Really looking forward to the EP knowing how good this sounds.
26 August 2015 at 15:36

Unknown said…
Great tune! Mayfair is an uplifting song with a touch of pathos too. Obvious hints of Steely Dan but with a British feel as well. Think Prefab Sprout meets West Coast.
26 August 2015 at 23:57

Unknown said…
Mayfair is a wonderful song with awesome lyrics too! And if this is a taste of what the rest of the album is going to be, I can't wait to hear the rest of it! Just fantastic!!!
27 August 2015 at 20:38

Ezbe said…
Such a gorgeous track with a beautiful, laid back melody. I'm a big fan of both Samuel Purdey and Corduroy, so I know the forthcoming EP will be musical bliss.
28 August 2015 at 00:29

Unknown said…
Fantastic insight Barney. Mayfair is an outstanding piece of work and I look forward to hearing and purchasing all the tracks. Even better would be the hear them performed live at an intimate venue in little ole London Town.
28 August 2015 at 01:45

Unknown said…
Classic, classy and contemporary at the same time.. In a nutshell: amazing music, top production values. We need more!!
29 August 2015 at 04:16

Nick Warneford said…
Stunning Barney you perfectionist. From the gorgeous intro into the elegant bones of the tune you bring all the west coast influences and deliver a wonderfully crafted song, beautifully arranged with incredible musianship and vocals. Cannot wait for more. Top work you talented sod.
30 August 2015 at 03:36

Sonja Fischer said…
Chris is so right: the song of the year! Don't you dare miss it! A little masterpiece of modern pop music.
30 August 2015 at 03:49

Anonymous said…
Powder blue tux is genius. Just like Barney Hurley. The man has great taste in music!! Proud to call him my friend. Brady Blade
30 August 2015 at 06:24

sybar said…
Quite an extraordinary and exquisite piece of 'perfection'. A lot of work pays off. A Legend working with Legends !
31 August 2015 at 05:28

DeaconGroovesMedia said…
All I can say is that when your ingredients contain Barney, Elliot & Leonhart you know you are bound for West Coast greatness! This track is just the start and I can't wait to hear the rest! Great job Barn!
1 September 2015 at 12:29

AM|FM West Coast Smooth said…
This is such an exquisite groove from Barney Hurley's new band Powder Blue Tux. Check out the Steely Dan rhythm section and horn guys on this track. And I can't wait to hear them go funky and upbeat on the next release too. Bring it on...
1 September 2015 at 15:31

Unknown said…
Barney this is a very cool tune. Really looking forward to more releases from you and the guys. x
17 September 2015 at 06:47

Timw said…
Material smoother than silky corduroy and a mere teaser too boot. West Coast dreamin' on a winter's night in Blighty. Cannot wait for the main course.

Unknown said…
You can now preorder the CD or 7" vinyl of Powder Blue Tux at www.preservationrecords.bigcartel.com
20 October 2016 at 22:39

Unknown said…
You can now preorder the CD or 7" vinyl of Powder Blue Tux at www.preservationrecords.bigcartel.com
20 October 2016 at 22:40