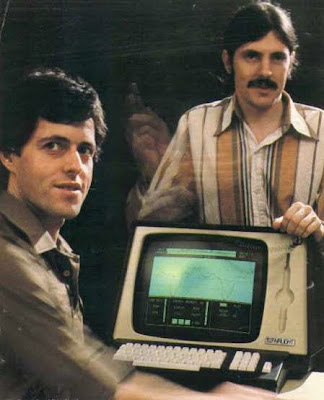 Eddy Rhead lives in Manchester. He likes many types of music and also sometimes likes to re-edit records others wouldn't touch. You can hear his edits here.
"I'd love to say that I grew up listening to Ron Hardy mixtapes and would wag it from school to catch the last couple of hours of Larry Levan at The Paradise Garage", he says. "But frankly - as a white , dorky kid in suburbia - my first introduction to 'dance' music was actually through buying safe, white rock records. After noticing the same names propping up on the 12" mixes in the early 1980s, such as Arthur Baker and Shep Pettibone, I became fascinated in the culture of remixing and even had a go myself with a 12" of a track that had a few different versions on, an SA90 cassette and steady finger hovering over the pause button on my tape player."
So Rock and Soul Volume One is "a 21st century version of those mixtapes, a little homage to those white rock artists who took elements of dance music and worked it into their own records."
1) Voices Inside My Head - The Police - 1980
"Proving that before he became a bore Sting could lay down a cheeky little bass line. I'm sure you all know this track so it doesn't need explaining."
2) Sound and Vision - David Bowie - 1976
"Bowie was perhaps one the earliest and most noteworthy rock artists to directly reference black music in his work with the Young Americans album and beyond. I think someone as clever as Bowie could get away with this and his 'soul' records never sound like a pastiche. Sound and Vision is just a damn fine track with a great solid groove."
3) I Cant Go For That (Dance Mix) - Hall and Oates - 1981
"There is no getting away from the quality of Hall and Oates records. Helped along by the remarkable producer Arif Mardin, they just wrote great songs and Daryll Hall has a fantastic voice. The version you may normally hear of this track on the radio is actually an edit of the original version - which was a longer 12" Dance Mix - the one presented here. It topped the US R&B chart - which in 1981 had long been the preserve of black music."
4) C'est La Vie (Arthur Baker Dance Mix) - Robbie Nevil - 1986
"Nevil is pretty bland. I think he writes songs for High School Musical now but this was a good single."
5) Celebrate Youth (Dance Mix) - Rick Springfield  - 1985
"Springfield was like a lightweight Australian Bruce Springsteen. Anyway in the mid 80s he had a couple of good singles and this was the best of them - mainly due to this mix which is by Mark Kamins with an edit by the Latin Racsals."
6) Out of Touch (Arthur Baker Dub) - Hall and Oates - 1984
"Hall and Oates embraced the vogue for getting dance producers into  remix tracks so much so they went as far as getting everyone's favourite early 80s remixer Arthur Baker in for production duties on the Big Bam Boom album. Here is a rather bizzare dub version of one of the singles off the album."
7) Owner of A Lonely Heart (Red and Blue Mix) - Yes - 1983
"In 1980 ponderous prog rock group Yes took the strange step of hiring Trevor Horn from The Buggles to join the band as lead vocalist. Yes broke up soon afterwards but Horn then produced their hugely successful comeback album three years later. The mix presented here is probably what happened when Yes had gone home and Trevor and his mates got let loose with the masters. Trevor went onto form the Art of Noise and it could be argued that this track essentially an early Art of Noise record."
8) Call Me (The Indiscriminate Mix) - Go West - 1985
"Go West probably look a bit naff now but i thought this was great record at the time and i still think it sounds ace now. I like this mix - its so flipping 80s - I love that they even did a mix called The Kitchen Sink Mix because they have just thrown every 'now' sound off the latest synth and every editing technique in just because they could."
9) Dancing in the Dark (Arthur Baker Dub) - Bruce Springsteen - 1984
"Even The Boss got in on the act. All his redneck followers hated the remix versions - something I'm sure Brucey quietly loved."
10) She Sells Sanctuary - The Cult - 1985
"No odd dub mixes of this one (apart from my own little re-edit on the intro) - just some straight up ROCK. There were some remixes of this at the time but I don't have them. This is an awesome record and the structure and phrasing of it are strangely House-like - epic intro - solid 4/4 beat - hands in the air drop out.....well, I may be getting a bit carried away but you get the idea."
Download
AOR mix by Ed Zone
Email Post

Wade Nichols said…
Bowie was perhaps one the earliest and most noteworthy rock artists to directly reference black music in his work with the Young Americans album and beyond.

the saucer people said…
The Bowie quote was badly phrased and the reference is to seventies soul/disco obviously....cool mix and I totally agree about The Cult 'She Sells Sanctuary' track, it can still cause dancefloor mayhem in the right circles...the Howling Mix is the one to get. I am suprised no-one has got around to re-editing tracks off the first Southern Death Cult album such as Fat Man and Moya which have a stonking bass and drum groove though I guess it will only be a matter of time as I forecast by 2017 every track ever released will have a corresponding re-edit ;)