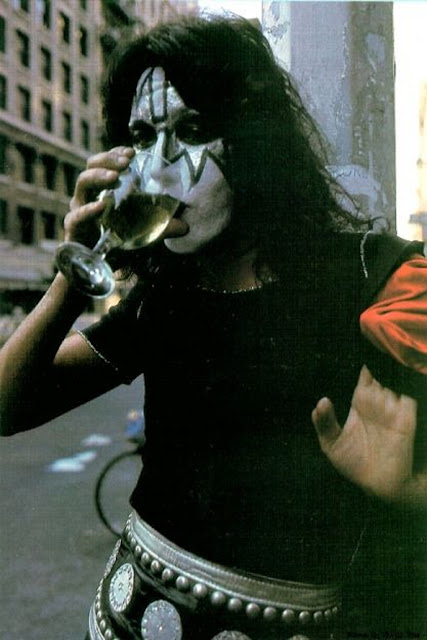 In one of the great acts of rock and roll hubris the members of KISS decided to release four solo albums simultaneously in 1978 and to cast themselves as superheroes in a feature film called "KISS Meets The Phantom Of The Park".


KISS had become America's biggest rock band a year earlier with the release of Love Gun and Alive 11 and their management and label (the legendary Casablanca Records) started to believe that the brand had limitless appeal. Sadly it turned out that they'd over-reached themselves: the records were a commercial (and musical) disappointment and the movie was so bad that even these arch-merchandisers (there's even KISS toilet paper and a KISS coffin) have blocked any attempt to market the movie ever since. Despite a hit disco single in 1979 and a  revival of interest in 1983 when they took their make up off for the Lick It Up album, KISS had essentially blown it.

The only bright spot in this dismal campaign was the success of "New York Groove", the single off the lead guitarist Ace Frehley's album. It was a maddening development for Gene Simmons and Paul Stanley, the band's leaders, who were falling out with Frehley over his addiction problems at the time. Simmons would go on to describe Frehley as a "drugged racist pig with low self-sesteem who did nothing."   And today "New York Groove" is the only song anyone can remember from this solo album period and it's possibly the most popular song among non-KISS fans too.

Thanks to Chris Massey for this new edit. Chris works at Electriks in Manchester, home of the Electric Elephant Festival (held every year in Croatia), The Unabombers and the Electric Chair. He has also remixed tracks for Southern Fried Records and for a variety of other labels.