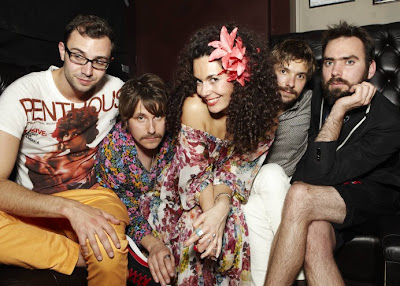 Modern Yacht Rockers Shake Tiger Shake describe their sound as a combination of "1980s synths, Prince, Fleetwood Mac, Studio 54: Bianca Jagger on a white horse led by Bryan Ferry". Formed in 2011 by Sarah Lazenby (vocals) and Paull Withey (guitar/vocals),  they're on  a mission to bring the glamorous decadence of Los Angeles to the nightclubs of London. Their debut single On The Run has just received airplay on Dermot O'Leary's show on Radio 2 and been featured in the Guardian - and it comes with a video directed by Damien Wasylkiw (Prince/ Michael Jackson/ Usher) and a smooth remix by AOR Disco regulars The Project Club. Here's Part One of our interview with Shake Tiger Shake. Part Two - in which the band discuss the current Yacht Rock revival - is coming soon.

What's the story behind the name of the band?

We'd been using Shake informally within the band for a while. We wanted a name that evoked a feeling of energy and movement. Then one evening we were playing records for each other, and Paull put on Thriller. We saw the image of Michael cradling that tiger cub                     on the gatefold, and the name leapt into existence.

The Guardian piece said your use of 70s soft rock and 80s synth influences doesn't feel "arch or knowing". Who are the artists you feel particularly passionate about?

We love artists from that period, especially Fleetwood Mac and Prince. Music that has an immediate groove and pull, but that has an unembarrassed pop sensibility combined with real heart and sincerity. That's something we are really trying to project with our music. We're not a tribute act to that period, though, and we don't use those references in a retr0 or ironic fashion.

How did you meet?

Do you all share the same taste in music? Or did you have to convert anyone?

We knew that we shared the same taste when we drove together to our first video shoot. We were listening to Thriller in the car, singing along, and everyone in the car knew all the words to The Girl Is Mine, including the weird (and delightful) spoken-word section between Macca and Michael Jackson. When something like that happens, you just know...

Tell us about the original mix of the single On The Run...

We recorded the bulk of the song in our home studio, but did the live drums and  vocals in the studio owned by the producer Dave Allan (The Cure, Human League, Depeche Mode) we had it mixed and mastered in LA by Piers Baron, who we just clicked with.

Awesome! He's such a cool dude and we're stoked with the results – the video really nails our whole image and vibe, which for a debut video is perfect. He immediately got our vision – of creating a Studio 54 kind of decadent glamour. And it was great having those     fireworks go off around us as we were filming too.

What else have you got planned this year?

We're playing several festivals such The Magic Loungeabout and BBC6 Music's Wagon Festival.  We are particularly excited about sharing a bill with Chic at Vintage  on Friday 13th July. We are planning to put together a five-song EP after the festivals are over. Our debut single is available now – people can buy it on iTunes, or follow the links from our website.

And tell us about the remix of On The Run...

Steve Lee of The Project Club has done a perfect smooth remix that we absolutely love. It sounds totally different to the original, which is what we were aiming for.