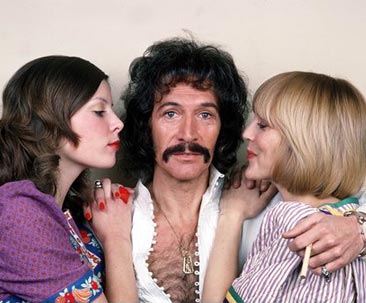 Following their superb edits of America's Muskrat Love, Tim Buckley's Cafe and many others,  The Two Mammarachos return with this revamp of a track from Peter Green's 1979 album In The Skies. The Two Mamarrachos are two DJs from San Sebastian in Spain -  Borja Campion and Jaime Sagastibeltza - and we spoke to them last week.

When did you decide to work together as The Two Mamarrachos?

Borja: We've known each other for 20 years. Jaime came and approached my cousin, and he now has two children with her (laughs). After DJing at various clubs such as Amnesia and KU he became involved in production (as Dr. Beat from San Sebastian, he composed Mediterrano) and I was obsessed with DJing. I used to spend all my money buying vinyl (10,000 in the collection so far) and going to play him the new sounds. I was also interested in learning production skills so in 2004 we joined forces.
Jaime: Borja keeps me fresh about the latest styles and trends. A real visionary - and a real showman in the DJ box. He's a stage animal!

Have you always listened 1970s soft rock? Or did you discover it recently?

Borja: At first we were more into electronic dance music  but we have always had a weakness for guitars. And ever since the acid house era began we have mixed rock music in our sets.
Jaime: I grew up hearing soft rock in the house. My father was a hippy in the 1970's - and still is (laughs) He gave me a tape of songs by America when I was six years old. My mother used to listen Paco de Lucia, Pink Floyd and Kraftwerk. So that's a good foundation, I think.

Will you be doing any edits of tracks from the 1980s?

Borja: '80s music was wonderful. It was in the '80s when they began to use production techniques that we all want to emulate today.The music of the 70s is like a diamond in the rough. A diamond can be polished, but editing a song from the '80s - which is so smooth already - just seems tacky and sacrilegious.

What are T2MM planning next?

We releasing single with our edits of "Deep Purple - Keep on Moving" and "America - Muskrat Love" on Jolly Jams (Berlin) before Christmas. And "Tim Buckley - Cafe" is going to be be included in Volume 4 of Coyote's magnificent Magic Wand series.We are very comfortable playing and producing AOR music. Our goal is to continue to release only on vinyl, and we will create our own label if necessary. Also - we are currently looking for an agent who'll getus out there, but not just any agent: we want play AOR only to the public that appreciates it.

Download Just For You and A Short Mixtape For AOR Disco