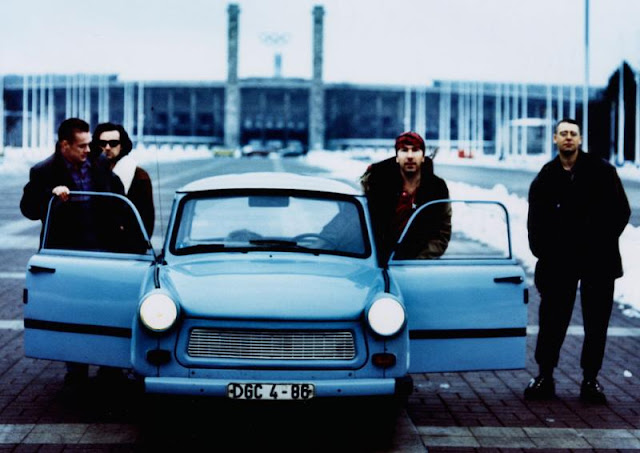 "Part of the reason I did this mix was that U2 are so desperately uncool it thought it would be interesting if I could take one of the their better songs and create something interesting with it," says Jonathan Moore aka Leftside Wobble. "So here it is. Pompous 90s stadium rock put through the Leftside Wobble blender."

At AOR Disco we think that pomposity in rock music ought to be encouraged at all times but this is another great remix from Moore. (Worth checking out his classic rework of Tomorrow Never Knows by The Beatles and his take on Once In a Lifetime by Talking Heads is outstanding too). Of course Mysterious Ways from the 1991 Achtung Baby album was actually a rare departure from pomposity by U2. In fact this record (and subsequent Zoo TV tour) was one of the most extraordinary turnarounds in the history of popular music. After the leather-waistcoasts and deep earnestness of the 1980s U2 were suddenly danceable, ironic and relevant just at the point when acid house crossed over into the mainstream. Drum machines and breakbeats were introduced, Paul Oakenfold was their new support act and remixer of their singles (ravers of a certain age might remember how good the Perfecto Trance Mix  of Even Better Than The Real Thing sounded on a couple of Snowballs) and somehow U2 got away with it. While bands like Simple Minds got left behind U2 were briefly - and against all the odds - cool again.

It didn't last of course but it's good to be reminded again how well U2's music suits a club remix.